LOOKING FOR A FUN, ENGAGING
AND UNIQUE NIGHT OUT? YOU’VE FOUND IT!

Every murder mystery company has a different style. Some shows are closer to traditional plays, while others resemble a “How to Host a Mystery” game with a few actors acting as facilitators. Our shows are about providing laughter and entertainment to all audience members. If you just want to sit back, relax and watch the show, you will have fun. If you consider yourself a Sherlock Holmes type, there is plenty of opportunity to interact and question suspects. If you are extra adventuresome, you could find yourself among the suspects. All of our mystery shows are comedic. Every audience member gets a program that sets up the scene for the evening and provides a list of characters. The show starts with introductory scenes. These scenes are presentational and acquaint participants with the characters, who will eventually become “suspects”.

After these introductory scenes, the actors then mingle with the audience, dropping bits of information and misinformation. Each audience member has also been given a clue – a question to ask one of the characters or a unique piece of information about a character. This acts as an ice breaker, making it easier for individuals to question characters. The clues do not solve the mystery for you. Not every character will visit every table, but every table will be visited. Once the “table talk” portion is concluded, the show once again becomes presentational, culminating in the “murder”.

Following the murder, the investigation commences. The investigator, with the help of the audience, compiles a list of suspects. Sometimes audience members are implicated, but they are never put on the spot unless they are willing to participate. The audience is then given 3-4 minutes to question each suspect. Our investigator makes sure the questions don’t go too far off track. After each suspect identified has been questioned, a vote is taken. The ending is then performed, and participants can see how close they came to solving the murder.

Do or Die Mysteries are not appropriate for all audience members. Below are examples of those who should probably not attend Do or Die Shows:

Homicidal Maniacs: Those predisposed towards homicide are discouraged from attending shows. They tend to want to participate on an inappropriate level, which could lead to the wrong person being murdered. This makes the show confusing.

Small Children: Although the shows are comic, small children may find the conflict and violence confusing and frightening.

Humor Impaired: If you don’t like to laugh, you won’t enjoy our shows. 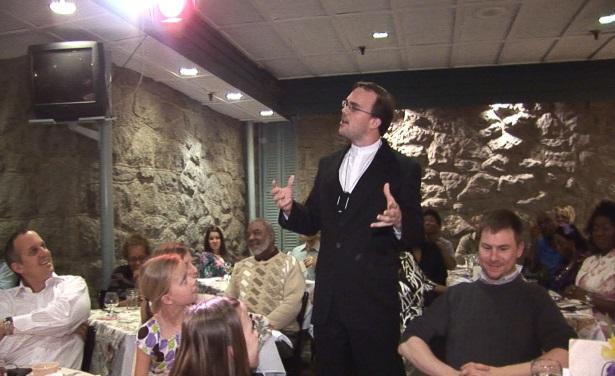 GET YOUR TICKET TO MURDER

Dust off your Sam Spade overcoat, polish up your magnifying glass and see if you can solve the crime...or will you die laughing?